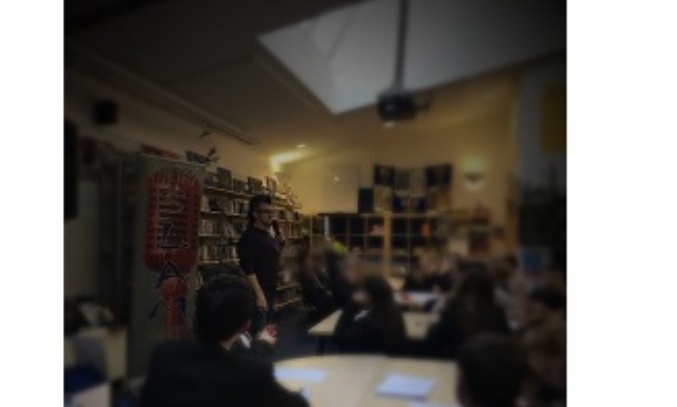 On Wednesday 10th February, 60 year 8 pupils took part in an all-day poetry workshop with performance poet Giovanni Esposito – more commonly known as Spoz. The day began with Spoz performing some of his poems and talking to students about why he loves poetry. They then had the chance to have a go themselves, working in teams of six to come up with as many rhyming words as they could before using these to ‘battle’ each other in a war of words.

After break, they wrote poems about chocolate which they performed for each other before finally creating a poem that fit with the theme ‘voices and visions’. They talked about what they felt needed to change in the world and then, again in their teams of six, created a chorus for a poem addressing their ideas. They wrote their own individual versus and then practised their performances before competing in our very own SVS poetry slam after lunch which was won by two teams: The Exclamation Sparks and Onomato-We’re Here.

The students were superbly behaved and a credit to the school. They worked hard, remained focused and collaborated well to achieve some incredible end results. It was wonderful to see them enjoying themselves and discovering poetry in a new way. One year 8 boy said he hadn’t expected to enjoy it so much, that he thought poetry would be boring but he actually felt it encouraged him to be creative and express himself. All of the students did themselves, their families and the school proud and Spoz was very complimentary about both their conduct and their work.

The two winning teams from the poetry slam will compete in the Gloucester Schools poetry slam at Cheltenham town hall on April 28th.