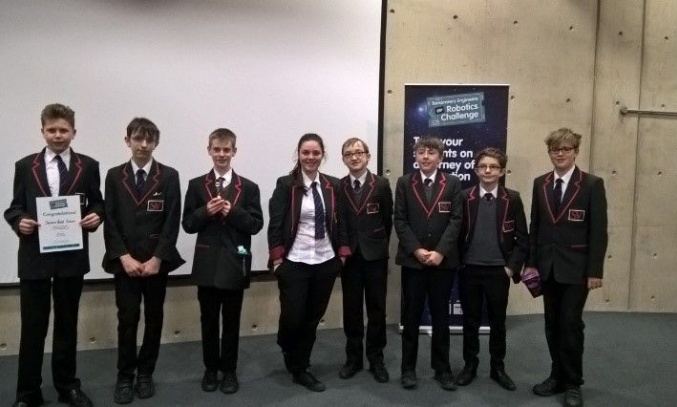 What a great way to spend a day out of school. 4 Year 8 and 4 Year 9 students took part in the regional finals for the Tomorrow’s Engineers Robot Challenge on the 9th March in the spectacular surroundings of the RAF Museum at Cosford.

The students have been working hard over the past four months meeting after school with Mr Pitt-Hughes to design a Lego based robot to perform a series of demanding challenges based on space missions.

We set up base underneath the Vulcan bomber and next to the vast variety of missiles. The students spoke to many experts including a Navy Commander and an Engineer from Rolls Royce. During the day they had to perform a variety of tasks including a presentation and demonstrations.

Severn Vale performed exceptionally well on the day and were up against 20+ other high standard schools. In fact the judges awarded Severn Vale as the school with the Robot with the best design AND they won the team challenge where they constructed a K’nex vehicle in the shortest time which also travelled the greatest distance by quite some way.

Overall they were pipped at the post for the finals and were let down by technical difficulties but they learned a lot about problem solving and team work. We hope to enter a new team next year which will be partnered with Rolls Royce.