A Night with John Williams and the Studio Orchestra​​​​​​​ 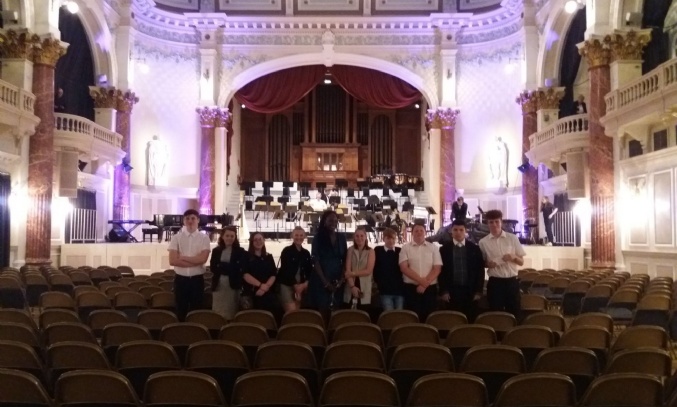 Twelve students, three teachers and a trombone made their way to Cheltenham Town Hall on Friday 20th September to see the newly formed Studio Orchestra perform a selection of film music composed by the genius that is John Williams.

Twelve students, three teachers and a trombone made their way to Cheltenham Town Hall on Friday 20th September to see the newly formed Studio Orchestra perform a selection of film music composed by the genius that is John Williams.  And to top that…the bass trombone was being played by our very own Head of Music, Mr Khokher, who began his evening, head in embarrassed hands, as we paraded “We love Mr Khokher” banners outside the Town Hall!  Well, we thought is was funny!

Smartly dressed, curious and quietly excited students took to their seats.  We were soon greeted by a full orchestra of sound in the form of the 20th Century Fox Fanfare.  This was immediately followed by the only piece that can follow this… the Star Wars main titles.  “Wow…they’re quite good aren’t they!” was heard from the audience as they continued through themes from Harry Potter, ET, Hook, Jurassic Park, Superman, Indiana Jones, Close Encounters of the Third Kind and War Horse (did you know he did War Horse?!).

Two moments stick out above all: the theme from Jaws was actually, quite scary!  You could tell that the audience consisted predominantly of those who had lived through it first time around… few of whom could sit still during this piece!  How such a simple two note musical motif can be orchestrated so effectively and have such an impact is remarkable.  But perhaps not quite as remarkable as the violin solo, played stunningly by Catherine Lawlor, from Schindler’s List.  “You need to find a better composer than I” was the reply John Williams gave when asked by Spielberg to compose for this movie.  “I would, but they are all dead!” was Spielberg’s response.  The outcome: a theme that evokes the horror, poignancy and heartbreak that remains within anyone who has watched and listened to this exceptional movie.  It was just beautiful, and a privilege to hear live.  And yes…there were tears.

The orchestra finished with The Throne Room and End Titles from Star Wars (you know…the bit where Luke and Chewie compete for most straightly combed hair/s…and that cheeky grin between Han and Leia!) and a standing ovation ensued - in part for a fabulous debut from a very promising orchestra, and in part for Mr William’s himself.

Mr Khokher’s bass trombone expertly led the Emperor’s March for our finale, and the concert came to an end with a standing ovation.  For most of our students it was a first time hearing a full orchestra live…and what a way to do it.  What could possible top it?  An evening with Hanz Zimmer perhaps?  We can discuss that one another time!