Mr Rowland attends a prestigious reception at the House of Commons

The Pearson Teaching Awards hosted a prestigious event at the House of Commons on Tuesday 24th June to honour all those who have won a Silver Teaching Award in 2014. 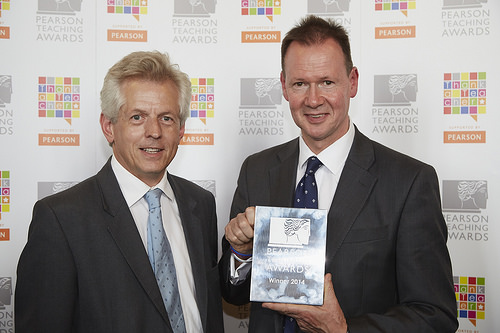 Mr Rowland attended the event with Tanya Ciriaco, Chair of Governors, which was held to celebrate exceptional teachers from across the UK.  He won his trophy in the category, The Award for Lifetime Achievement, after being shortlisted from a record number of over 20,000 nominations made by grateful pupils, past and present, parents and colleagues.

In addition to the reception Mr Rowland had a tour of the Houses of Parliament, dropped into a session at the Upper Chamber and had tea in the Lords' tearoom, organised by Richard Graham MP.

Mr Rowland said “It really was a memorable day and a reminder (not that I needed one) of how fortunate I am to have been treated so well as I leave Headship”.

He will now join 59 fellow Silver Award winners at the UK final of the Teaching Awards at London’s Guildhall on 26th October, where 11 Silver Award winners will receive a Gold Award. The ceremony will be filmed and broadcast by the BBC. We all have our fingers crossed for a win!