Ex Severn Vale student Ross Bartlett has scooped a national apprenticeship award for his outstanding work with Gloucester-based Barnwood Shopfitting. The 19-year-old has been presented with the gold award from the National Association of Shopfitters/ Construction Industry Training Board for the best final year apprentice. Ross also received a £500 prize from the NAS Training Committee chairman John Bailey and is helping to maintain a proud tradition of apprenticeship training within the Barnwood Group, now in its 52nd year of successful business.

Simon Carey, Managing Director of the Barnwood Group, said: “We are delighted with Ross’s 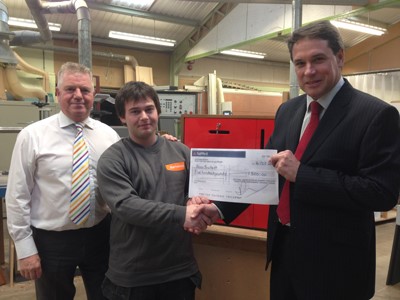 success. Apprentices are the lifeblood of the company. “In fact we have several board directors who started as apprentices. It is fantastic when apprentices are recognised in this way for their particular skills and I hope it will encourage more people to join the industry and go on and succeed.”

Barnwood Shopfitting’s Production Director John Morgan said: “We offer local young people the opportunity to learn a trade that can last them a lifetime. “Apprenticeships are the cornerstone this company was built on and one of the main reasons for its continued success. It is something we are proud of and we will continue to do.”